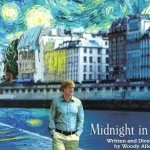 One of the this month’s Film Club films was ‘Midnight in Paris’ (2003) which is a thoroughly Woody Allen auteur film set in Paris. The opening sequence takes the form of a series of scenes of Paris from morning until midnight through sunshine and rain, suggesting a kind of love story to Paris. This sequence forshadows some of the haunts (locations) and themes (midnight as the ‘witching hour’) of the film.

Midnight in Paris is a delightful tale of nostalgia and sentiment starring Owen Wilson, a rather convincing surrogate Woody Allen. Wilson is Gil, a successful Hollywood screenwriter chasing the dream of becoming a novelist. One evening, in an attempt to get away from an annoying ‘know-it-all’ who has captivated everyones attention, Gil takes a stroll and happens upon a rather different Paris at midnight.

The hero’s journey is one of self discovery through a number of encounters with some iconic characters from 1920’s Paris.

Gertrude Stein, played by cathy Bates, helps Gil on his writing journey with the following:

“We all fear death and question our place in the universe. The aretist’s job is not to succome to despair, but to find an antidote to the emptiness of existance.”

‘A trip to the past’ is the recipe and ‘living in the present’ is the message of this film – described as a ‘breath of fresh air’ by one film club member.

Wilson IS ‘Allen’ with all the charactersitcs of the typical Woody Allen protagonist – a flawed hero, philosopher and romantic idealist. As a seasoned wordsmith, Woody Allen’s script is filled with great lines which beautifully articulate the universalities of the human condition.

This is a must see for Woody Allen fans and definitely worth a look for everyone else.

Closing statements for ‘Aliens and Others’ were:

One response to “Midnight in Paris”