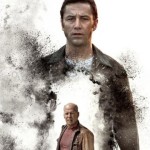 Looper is a piece of quality science fiction.

It looks fantastic and in every detail (except the somewhat convoluted plot) is highly believable – a result, no doubt, of its unashamedly high production values. Whilst it is derivative of other well-known Sci-Fi films (The Terminator, Children of Men etc.), it is still engaging and interesting enough in its own right not to be just another near-future tale of time travel.

The plot centres around a present time (2044), where the contrast between the ‘haves’ and the ‘have-nots’ is stark, and a near future (seventy years later). In the future, time travel has been invented, but outlawed. Mobs rule the society, led by a shadowy, ruthless dictator-type figure known as The Rainmaker. His enemies are sent back to the ‘present’ (2044) and instantly blown away by hired guns called Loopers, thus ensuring that they will not exist in the future. The twist is, that eventually Loopers end up ‘wasting’ their own future-self (this is called closing the loop).

Enter Joseph Gordon-Levitt. He is a successful Looper and enjoys a life of sex and drugs, when not killing hoodlums from the future or hoarding silver ingots (his payment). Inevitably, one day his future self (Bruce Willis) is sent back, but he fails to kill him(self). Like all good time travel films, Looper has, as part of the plot, the concept of changing the past, in order to influence the future. There is also, central to the plot, a theme which deals with the power of love. This centres around Emily Blunt, a single parent living on a farm outside the city, whose performance is quite simply the best in the film. Bruce Willis is, well…. Bruce Willis, and Gordon-Levitt’s performance is strong though I was constantly distracted by the way he looks as he has had facial prosthetics in order to make him look more like Bruce Willis (this doesn’t work!).

Looper is an intelligent film, ably directed by Rian Johnson, which poses questions, and airs dilemmas about the human condition now, and in a possible future. It is definitely worth a look.