Kramer vs Kramer – the beauty of performance

Posted on Saturday, 14 April, 2012 | Comments Off on Kramer vs Kramer – the beauty of performance 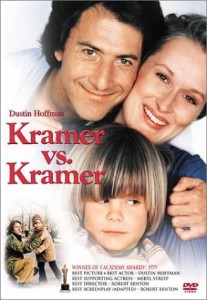 The Beauty of Performance:

‘Kramer vs Kramer’ exhibits some of the very best acting an audience is likely to see.

For those who know me, I’ll watch anything with Meryl Streep in it. But one of the main reasons for this is her performance in Kramer vs Kramer. In fact all the acting in this film blew me away. I was instantly drawn in by the plight of the Kramers. I felt for every one of the, Dustan Hoffman and the little boy included.

But in terms of performance, its the courtroom scene which I keep going back to.

The courtroom scene cuts me to the emotional core every time I watch it. But it’s not only the performances of Streep and Hoffman that make this scene so powerful. It’s the camera and editing which draws the audience in and ‘manipulates’ our emotions so cleverly.

As Joanna Kramer is questioned on the witness stand, watch how the camera begins a dance, going in tighter and tighter, and mirroring the heightening emotions and anxiety of both Kramers.

When teaching camera and editing and story telling with the camera lens I always show students this scene. It never dates!

For a look at some of the film work I have done with A Level students in Film and Media Studies and holiday clubs, have a look at my YouTube channel or see my Film Education page. There are also some very useful videos on photography, video and writing here. At my Aliens & Others film club we watch and discuss films in detail a bit like a book club.